A noticeable absence for a while … but for good reason. I went completely off the grid for a week – white water rafting in the Grand Canyon. No computer, no phone, no electricity at all for a solid week. It’s good to disconnect for a while … although it’s rather challenging catching up on emails, etc when returning! I’ve been procrastinating – I had set a goal to write a series of posts based on my journal (yes, a paper recording device!) when one of our band of 16 women posted a beautiful summary of the entire experience here. Thank you Andrea, for reminding me to get going!

I did some writing and reflecting while on the Colorado river … and it was an extraordinary learning experience, and one that convinces me even more that traditional schooling is not the best way for kids (or adults!) to be educated.

9/11 … I know, strange to be traveling on this day … but even at 6AM, the Philly airport was hopping, very little sign that the day has another meaning (except for some extra vigilant TSA folks at security).

So there I was … flying west on my own to meet a group of women I don’t know, and to attempt something I never thought I’d do. It was a quiet and relaxed flight. I listened to music and watched the city below become rolling green mountains and mist-wreathed valleys. I dozed and when I awoke, the landscape had become flat, brown, and alien. And then, startlingly, mountains. I thought back to a month earlier when my sister proposed the idea of joining her group of friends in the Grand Canyon. Sure, it seemed like a good idea at the time.

Meeting up with the group was a straightforward affair and the majority of us shuttled up to Flagstaff. The landscape shifted from flat desert spotted with saguaro cactus to mountains covered with fir trees, the ground carpeted with beautiful golden flowers.

At the Radisson, we spent our last night in a hotel. Please understand that up until this moment, my idea of camping had been settling for a 3-star hotel. We were prepping for four nights on the Colorado River … just about as remote as it gets. We ate dinner and then attended a meeting to prepare for the journey.

Our guide, Michael, came across as pretty hard core and read us the riot act about not having the proper gear. “Of all the items on the packing list, waterproof gear is the most essential. Get it tonight.” Thus, ensued a frantic trip to the local Walmart and $50 later, I had enough gear to survive nuclear winter and somehow I managed to shove it all in my waterproof bag.

The day started bright and early at 6:45AM. Not exactly a spa. 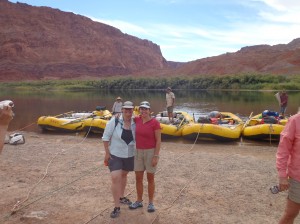 Our final farewell to the world was packing away the iphones … last calls home, and then we were off. The day began with a rather long drive north to Lee’s Ferry – a popular put-in spot for the Canyon river trips. We awkwardly clambered into our rafts and began floating down the river. The morning was uneventful, just beautiful scenery and serene floating – only an occasional mild riffle of water to push us a little faster downstream.

We stopped on a small beach and were introduced to eating lunch, river-style. A sanitizing hand-washing station was the first stop, then sandwiches munched with no plates or napkins in order to minimize waste. The first “pee in the river” episode did not run so smoothly – unused to the steep banks of the Colorado, I went in almost up to my neck. If my sister, Sam, hadn’t been there to help me out, I’d probably still be floating downstream.

We continued after lunch … it was idyllic and serene. Morgan was our guide that day and he treated us to stories of the rock formations and the reasons for the varied colors. We spotted big-horned sheep, ospreys, and condors. It was lazy, warm, and lovely.

We finally hit a couple of bigger rapids – great fun, and thoroughly drenching. We landed at our campsite and began the process of learning how to use the toileting system (an efficient but unpleasant affair due to the national park requirement that everything – and I mean everything – be packed out after the trip; the smell alone was enough to make you constipated), how to set up tents, how to arrange sleeping bags. Fortunately, very few in our group had any experience, so we muddled through – hysterically – together. A few of our guides took pity on us and assisted with the tents so that we could finally break for cocktails!

Sleeping under the stars was a new experience and although I was filled with trepidation, I finally relaxed enough to doze. The sky was brilliant – more stars than I’d ever seen, and through the center of the Canyon sky, the Milky Way ran as if to mirror the Colorado River below. I slept and woke periodically through the night, each time to a new sky as the earth turned. I woke to silver gray dawn and marveled as the stars clicked off and the sky lightened. Gradually, the true desert sun hit the top of the Canyon rim and I watched as daylight threw the walls into sharp relief. 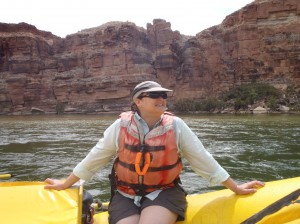 This is not a bad day at the office.