We had just completed a zodiac ride along the coast of South Isabela Island, searching for rays in mangrove-encircled lagoons. We had lucked out, finding large groups of spotted eagle and golden rays. As we sailed past the flightless cormorants drying their wings for the evening, the sun set majestically into the Pacific Ocean. We were welcomed back on board the Islander by our expedition leader, Carlos. 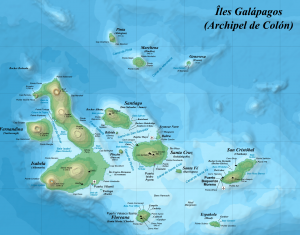 “Welcome back friends, the bar is open and we can watch the sunset!” We climbed to the boat’s upper deck and sipped tropical cocktails as the sun turned from red and orange, to gold and blue.

“Tomorrow morning, we have a special excursion for you early risers. We will stop in Post office Bay,” Carlos informed us.

We had clearly seen Post Office Bay marked on the map of the small southern island of Floreana in the Galapagos Archipelago. Until that night, I hadn’t thought to question whether or not there was an actual Post Office there. I assumed that the main Galapagos post office was on the island of Santa Cruz, the most inhabited isle in the archipelago.

Carlos explained that Post Office Bay was very special. Floreana’s position made it very popular with buccaneers, whalers, and colonists. In the 1790’s, British whalers established a post office to leave letters for other ships to retrieve and deliver to England. These postage-free missives were left for newly arriving sailors, who gladly selected letters addressed close to their home and hand delivered them – in exchange for someone doing the same for them in the future. This tradition has continued … visitors to Post Office Bay may leave their postcards and letters, with the understanding that they should search through the Post Office for anything addressed close to home, so they can deliver it when possible. The story sounded so intriguing, we agreed to the early morning wake up call, and found a few postcards to address.

6:30 dawned faster than we thought possible – perhaps due to the imbibing of tropical cocktails, perhaps due to the turbulent journey through open seas from Isabela to Floreana. Nevertheless, we sleepily dressed, gulped some coffee, donned our life vests and climbed into zodiacs for the trip to Post Office Bay. We were told it was a short walk from the beach, so we grabbed our water shoes and prepared for a wet landing.

In the early morning light, we sailed to Floreana and then clambered off the zodiac into the icy cold Pacific waters – too early for any sunshine to have warmed them. We scrambled up the beach and waited for our guide to point the way to the Post Office. I envisioned a small house, or maybe even a hut – considering that the Galapagos airport isn’t much more than a tin roof held up by some wooden beams. 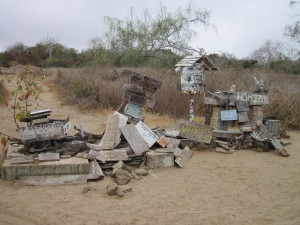 We trudged up the sandy hill and turned the bend to behold the Post Office … and burst out laughing. It’s really not much more than a barrel surrounded by a few weather-beaten crates. There are a few graffiti messages from some intrepid explorers, but other than that, it’s simply a barrel full of cards and letters.

Handfuls of postcards were passed through our group and folks began calling out locales: Hong Kong, Germany, California, Australia! We finally honed in on the locations that were most likely to match our homes and people started grabbing cards. We found one addressed to Philadelphia and we snatched it up, curious to know someone else from our region who had visited the islands.

Finally it was time to leave our own cards. We placed them in the Post Office barrel and then turned back to the beach. We laughed at the activity and climbed aboard our zodiacs. Soon we were racing across the waves, back to the boat, some breakfast, and another day’s adventure. 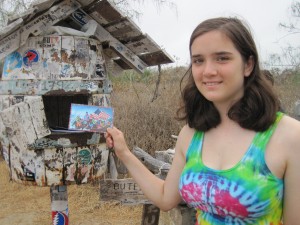 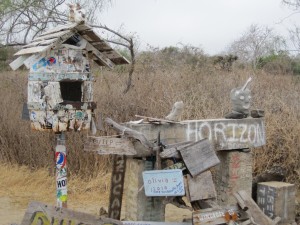